Without impedance control, considerable signal reflections and signal distortions can result, leading to design failure. Common signals, such as the PCI bus, PCI-E bus, USB, Ethernet, DDR memory, and LVDS signals, need to be controlled for impedance. Impedance control ultimately needs to be implemented through PCB design, and higher requirements are placed on the PCB process. After communicating with the PCB assembly factory and using the EDA software, the impedance of the traces is controlled according to the requirements of signal integrity.

A stripline is a copper strip placed in the middle of a dielectric between two conductive planes. If the thickness and width of the line, the dielectric constant of the medium, and the distance between the two ground planes are all controllable, then the characteristic impedance of the line is also controllable and the accuracy is within 10%.

3. Structure of multilayer board

In order to well control the impedance of the high TG PCB, we must first understand the structure of the PCB: what we usually call a multilayer board is a core board and prepreg laminated on top of each other. Thick, two-copper copper plate is the basic material of the printed board. The prepreg forms a so-called wetting layer, which plays the role of bonding the core board. Although it has a certain initial thickness, its thickness will change during the pressing process.

The outermost layer of a green solder mask PCB is a solder mask, which is what we often call "green oil". Of course, it can also be yellow or other colors. The thickness of the solder resist layer is generally not easy to determine accurately. The area without copper foil on the surface is slightly thicker than the area with copper foil, but because the thickness of the copper foil is missing, the copper foil still looks more prominent. When we use You can feel it when you touch the surface of the printed board with your fingers.

When making a printed board of a certain thickness, on the one hand, parameters of various materials need to be reasonably selected; on the other hand, the final thickness of the prepreg will be smaller than the initial thickness. 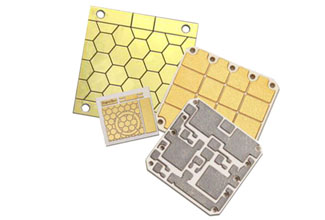 The same infiltration layer can use a maximum of 3 prepregs, and the thickness of the 3 prepregs cannot be the same. At least one prepreg can be used, but some manufacturers require at least two. If the thickness of the prepreg is not enough, the copper foil on both sides of the core board can be etched away, and then prepregs can be used on both sides for bonding, so that a thicker wetting layer can be achieved.