Because the radio frequency (RF) circuit is a distributed parameter circuit, it is easy to produce skin effects and coupling effects in the actual work of the circuit. Therefore, in actual PCB design, it will be difficult to control the interference radiation in the circuit, such as digital circuits and analog Interference between circuits, noise interference from power supply, interference caused by irrational ground, etc. Because of this, in the PCB design process, how to weigh the advantages and disadvantages to find a suitable compromise point, minimize these interferences, and even avoid the interference of some circuits, is the key to the success of RF circuit PCB design. From the perspective of PCB layout, this article provides some processing techniques, which is of great use to improve the anti-interference ability of RF circuits.

The following techniques are often used in layouts.

The components of the RF main signal are arranged in a zigzag pattern as much as possible. However, due to the space constraints of the PCB board and the cavity, many times cannot be arranged in a zigzag shape. At this time, an L-shape can be used. It is better not to use a U-shape layout. Sometimes it can not be avoided. The distance between them should be at least 1.5cm. In addition, when using an L-shaped or U-shaped layout, the turning point is best not to turn just after entering the interface, but to turn after a short straight line.

The same modules are made as much as possible or symmetrical.

The feeding inductance of the bias circuit is placed vertically with the RF channel, mainly to avoid mutual inductance between inductive devices.

In order to use space reasonably, the device can be laid out in a 45-degree direction to keep the RF line as short as possible. 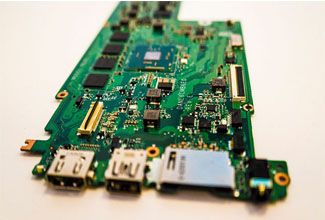 For the entire RF circuit, the RF units of different modules should be separated by a cavity, especially between sensitive circuits and strong radiation sources. In high-power multi-stage amplifiers, isolation between stages should also be guaranteed. After the tributary of the entire multilayer PCB circuit is placed, it is the treatment of the shielding cavity. The handling of the shielding cavity has the following precautions:

The whole shielding cavity is made into a regular shape as far as possible to facilitate the casting. For each shield cavity, try to make it rectangular, avoid square shield cavity.

The corner of the shield cavity is arc-shaped, and the shield metal cavity is generally cast-molded. The arc-shaped corner is convenient for drafting during casting.